The U.S. District Court for the Middle District of Alabama has issued a ruling that responsible agencies met threshold legal requirements for a review of environmental impacts and alternative transportation investments for Birmingham’s troublesome Northern Beltline.

SELC has been in court since 2011 in opposition to the project on behalf of Black Warrior Riverkeeper, calling for an updated environmental impact study, and to challenge a U.S. Army Corps of Engineers permit for the Northern Beltline’s first phase of construction.

“We are deeply disappointed in the decision allowing this project’s first phase to move forward without further review, as the Northern Beltline continues to be a bad investment for the Birmingham region,” said Gil Rogers, senior attorney. “We stand by our position that these agencies have continuously cut corners for the monetary gain of a few wealthy landowners and corporations to move the project forward without fully analyzing the environmental and economic costs, impacts, or alternatives.”

As the most expensive road project in the history of Alabama and one of the costliest per mile in the nation, the 52-mile, six-lane highway is projected to cost taxpayers $5.3 billion, while it is only expected to relieve 1-3% of traffic if ever completed. The Birmingham Metropolitan Planning Organization’s 2040 Regional Transportation Plan shows that only 19 miles (36%) of the Northern Beltline is projected to be complete by 2040, pushing the estimated completion date to approximately 75 years from now.

The long range plan also shows that the project’s unparalleled cost, will drain 55% of the capacity money for building or widening roads in Jefferson, Shelby, Chilton, St. Clair, Blount and Walker counties for the next 25 years. Even while construction on an initial segment commenced in April 2014, the Alabama Department of Transportation (ALDOT) has publicly stated that the agency only has enough dedicated funding for the first segment and has not determined how to pay for the rest of the project. SELC and the Riverkeeper maintain that the state’s limited transportation budget could be better used for other projects that will address safety and congestion issues on area roads while creating jobs and causing far fewer impacts to water resources.

“In choosing the longest and most environmentally destructive of all seven routes considered, ALDOT failed to thoroughly account for the Northern Beltline’s impacts to water resources throughout Jefferson County, including drinking water sources, neglecting its duty to serve the public interest,” said Nelson Brooke, Black Warrior Riverkeeper.

The highway will cross and permanently alter Black Warrior and Cahaba river tributaries in 90 places, including impacts to two major sources of drinking water. It will also impact wetlands in 35 places and 3,078 football fields’ worth of forest, as illustrated in the map below.

“Despite the ruling, this road is far from a done deal and our long-term goals continue to include implementing and enforcing a more transparent and thorough public input process for future road projects in Alabama,” said Rogers. “We are currently considering our options for appealing this decision.” 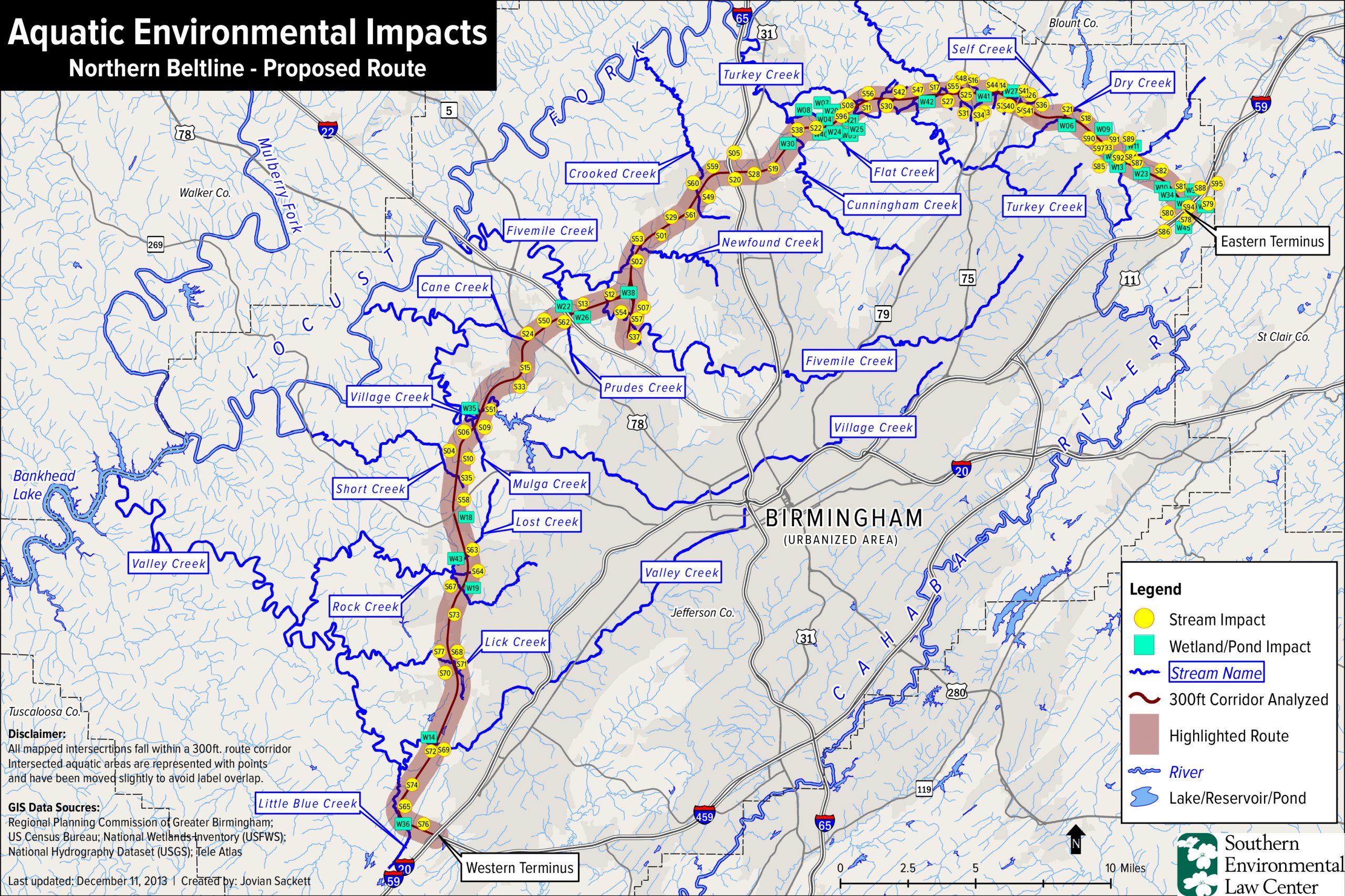